Home » Book - Biography of Reptile Gardens Founder » Rattlesnake Under His Hat: The Life and Times of Earl Brockelsby 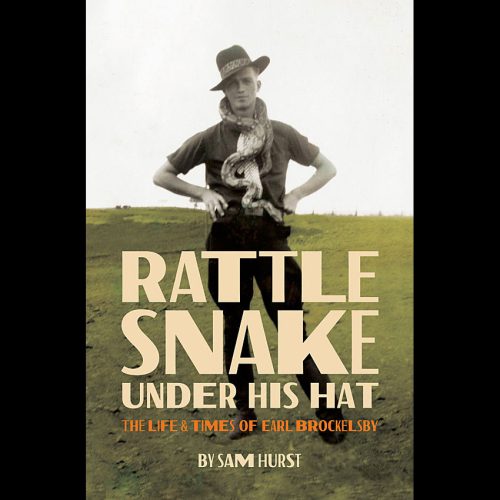 Rattlesnake Under His Hat: The Life and Times of Earl Brockelsby

Reptile Gardens’ founder, Earl Brockelsby was a fearless showman, an intrepid entrepreneur, an icon of western tourism, and a complex man who struggled with his own demons.

Brockelsby’s remarkable biography offers rare insight into the evolution of tourism in the American West in the years after World War II when millions of families piled into their automobiles and set out on vacation adventures that shaped the national identity and fueled the mythology of the region.

Born in Kadoka, South Dakota in the last days of the Western frontier, Brockelsby grew up in the badlands and the Black Hills. The oldest of three children, he came of age in the Great Depression. With the carving of Mount Rushmore in progress, he awed tourists at a local roadside attraction by hiding a live rattlesnake under his hat.

As a scout and sergeant for the Army in Europe, he witnessed the horrors and depredations of World War II. Brockelsby’s entrepreneurial drive was unleashed after he came home from the war. But as Rattlesnake Under His Hat reveals, his creative mania was paired with bouts of depression and even a nervous breakdown. His Reptile Gardens became one of the most successful roadside attractions in the Hills-and ultimately the largest collection of reptiles in the world, according to the Guinness Book of World Records.

College students beat down the doors to “wrestle a gator” for the tourists in the summer and sit around the campfire listening to Earl talk about his adventurous travels into the jungles of Papua New Guinea in search of the largest crocodiles in the world.

In Rattlesnake Under His Hat, former NBC News producer, documentary filmmaker and Emmy Award- winning journalist, Sam Hurst, paints a vivid portrait of Earl Brockelsby’s complex life and his influence on the development of western tourism.

The Circus and The Railroad

Visit Our Other Art Site NewGuineaArt.com

All content Copyright © 2023Joe Maierhauser. ALL rights reserved;do not reproduce without written consent.